Skip to Content
Home Featured The Anxiety Files: My Life Finally Makes Sense – Finding Out I Have Autism

I waited anxiously as Petra, a member of the primary care mental health team, added up the scores. I had taken an assessment. Thankfully, not the kind you have to study for, because a low score would definitely be expected. But not this time. As she gave a suspecting smile, I was not prepared for what she was about to say: “ten out of ten, a perfect score. You have autism.”

I haven’t been blogging for a while – almost two months, now. I’m really sorry to anyone who supports me but I’ve had a lot to deal with, health-wise.

To start, I have anaemia. I went to donate blood as a Father’s Day gift for my dad and uncle who have both passed away and needed blood, only to be told I have anaemia. I didn’t expect it at first, but my mother and neighbour (who we have adopted as our “auntie”) pointed out I was sleeping a lot. Symptoms worsened and at peak I’ve been sleeping around 17 hours a day. Not fun. But the news of my lack of iron was nowhere near as unexpected as the piece of news I received in these past eight weeks; I found out I have autism.

I’ve suffered with anxiety for as long as I remember, long before I was even diagnosed at the tender age of 10. It’s something I’ve battled with for years and years and had some dark periods. Very dark. It’s not the kind of anxiety that society, for some reason, has romanticised and turned into a “trend”. I’m not “nervous”; I am petrified. I get rooted to the spot, shake violently, gasp for breath as though the oxygen surrounding me is being sucked up rapidly and it is as though an actual apocalypse is happening inside me. Over the years, other mental health problems decided to join this parade of misery  – depression, cyclothymia and PTSD all joined hands to play Ring A Ring O’ Roses around my head and torture me.

For some reason, despite having these diagnoses, I would look at others with my conditions and feel like I was still different. Most people tend to find a lot of similarities between themselves and others with their conditions, but I still felt different. Like maybe my conditions were more intense or something. For years I have felt different. I can remember feeling different as a child and all through my teens, but there were no answers. Until now.

After my mental health took a turn for the worst a few weeks ago, my mother made an emergency appointment with the primary care mental health team to sort something out. I was expecting a change of medication; after all, I’ve been taking this one for a long time now and often medications can wear off. I just expected to show up, tell them how I’m feeling, get prescribed new meds and head back home so I could begin the process of “weaning” myself off of my current meds and start taking new ones. But that isn’t what happened at all. After explaining recent events to Petra and going into detail about other things, she rolled her office chair to the computer desk and started typing.

“My cousin has autism and we’re like twins. Our mental health is so identical, we joke about being separated at birth.”

“That’s what I’m thinking,” Petra responded, her eyes not leaving the screen as the printer began to whir. “I’m printing an ASD assessment off which I’d like you to answer.”

I nodded consent but didn’t say anything; I had no idea what ASD was but I didn’t want to seem like an idiot.

After answering a number of questions with the help of my mother, who could give a perspective from my family and friends, Petra looked at the score sheet and added up my answers.

“Ten out of ten, a perfect score. You have autism.”

My eyes widened as if I’d just walked into my local cafe only to see Harry Styles sat there. Time stopped. The world stood still.

What? How could I have autism? I don’t have any of the symptoms, this doesn’t make any sense. And besides, don’t you get diagnosed with that as a kid?

Petra rolled back over to the desk and sat with her head in her hand. I was staring at my mother. To be honest, I had nowhere else to look; I always looked to her – quite literally – whenever there was something wrong or uncomfortable happening.

My mother started to ask questions and the sound of her voice began to fade like in the movies. I was no longer in the doctor’s office; I was too busy running around in my mind screaming because I was scared. What did this mean? How am I autistic? Why don’t I know much about it? A boy in my class in school was autistic but I didn’t seem to be anything like him. How am I just now finding this out? Did I develop autism? Has my anxiety and depression been so bad they reproduced and sprouted a new mental health problem?

“You seem surprised, Jazz, but your cousin has autism and you two are like twins?”

“I didn’t – I don’t – really know what autism is. I didn’t think I’d have it. I didn’t understand how she has it. I was baffled to find out she had it but me?”

When my cousin broke the news last December that she had been diagnosed, I was taken off-guard. The little information I knew about autism didn’t seem to match her, so it made no sense. But hey, who am I to question the diagnosis of a medical professional?

For the first few minutes, I refused to believe I had autism – surely they wouldn’t diagnose me this late? Wouldn’t I have known before school or in the infants? I would have had help, right? Unfortunately, the sad truth is that my case was overlooked. It may even be possible that the school purposely overlooked my case because they didn’t want to pay for any additional support. I’m not saying that’s the case, but I was told that it’s possible and has happened many times in the past.

As Petra’s explanations began to sink in, everything started to make sense. It took merely a few hours – and a lot of flashbacks – to pinpoint signs of autism from my early years, to my adolescence, to right now. It was a lot for me to take in. I was relieved I wasn’t just “weird”. I was upset that I was unable to acknowledge a massive part of me until my early 20s. I was angry that it had taken so long to be diagnosed. For weeks after, I’d be faced with flashbacks of moments in my life and realise I was showing autistic traits. But what was even worse was getting flashbacks of moments in my life where I was bullied for showing autistic traits.

This one girl in my school bullied me and made my life hell for so long, despite me trying to befriend her. She once made fun of me for “waving at the floor”, but in reality, I was “flapping”; something autistic people do for stimulation. I never understood why I did it, but knew I had an urge to do it. I’ve seen my gran do it while looking for things so I thought it was something I had picked up from her.

Thinking back and realising I was bullied for a condition I have made my heart hurt even more. I was angry and wanted to find these people and make them pay for what they had done. I wanted to march into both my primary and secondary schools and play holy hell. How dare you miss these signs? Let me go for so long without help and instead of trying to help me when I needed it, punish me for things that weren’t even wrong? Calling the bunking officer to my parents when in actual fact I was at home in a crippling bout of anxiety and depression which was topped with suicidal thoughts? Making me suffer so much that I didn’t stand a chance at my GCSEs because I didn’t have the help I needed? But there was nothing I could do. It’s in the past. And as much as it hurts me, I cannot change it.

These past few weeks have been a journey. I’ve been trying to do my best to learn about autism from reliable sources. What I’ve learnt is that autism in females manifests differently to how it manifests in males. I learnt that my cringing habit of copying other people was just how females adapt and try to “fit in”. I learnt that wanting to throw up when making eye contact is actually an autistic thing. I learnt about “stimming”, which is a sensory stimulation to calm or provide a different input (e.g. if the input from the outside world is overwhelmingly frightening, exciting, or a whole range of feelings) and something I actually do a lot. I learnt that people with autism tend to have “special interests” (mine are Disney, Dalmatians and pop culture, in case you were wondering). I’ve learnt how women are better at masking their autism than men. But mostly, I’ve been – and am still – learning about how my autism affects me, where it comes into play, why I act certain ways and so much more. It’s like I’m meeting myself for the first time and things are finally starting to make sense. I can stop beating myself up for being an awkward, weird, unexplainable person because there is an explanation and I am valid. My condition is real and I can finally begin the process of making peace with myself because I can start to understand myself.

Although I’ve been diagnosed, I still need to attend an assessment just for formality. I know from here on is going to be a long journey and a road to understanding myself in greater detail. I hope on the way I will be able to get the right help and support I need.

If you think you may have autism, it’s worth checking out the National Autistic Society website for more info and speaking to your GP.

If you made it to the end, thank you so much for reading my story. It’s something I feel I want to talk about as I embark on this journey and I can’t wait to be back in the blogging game! 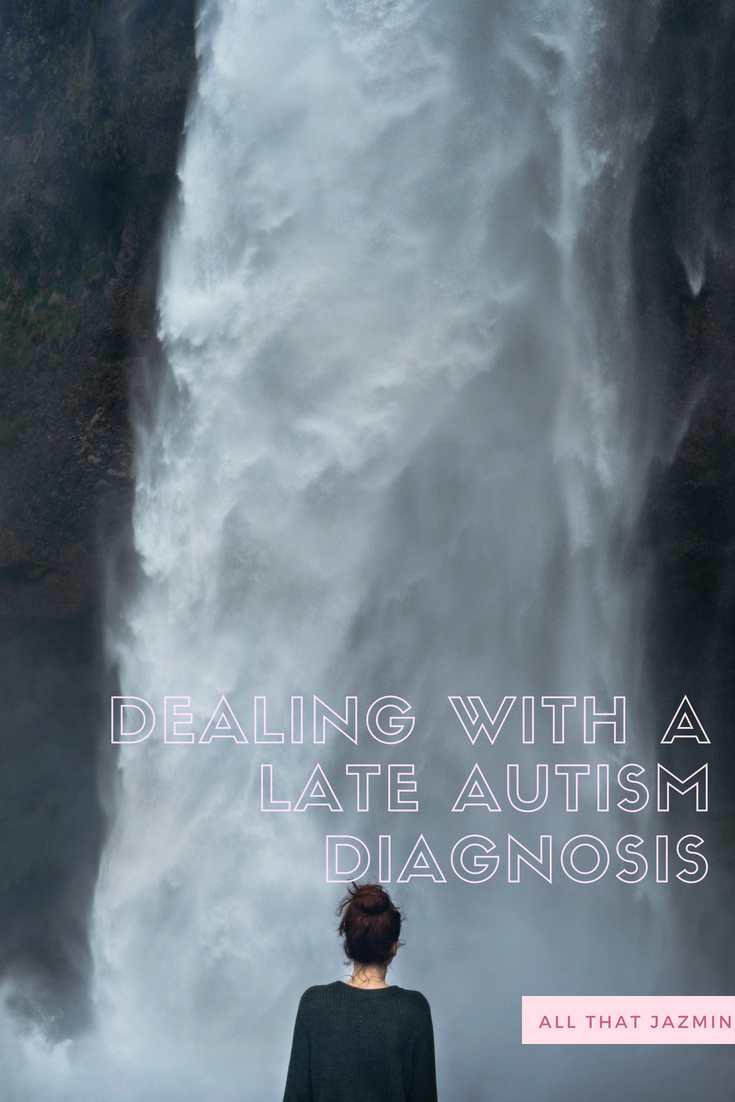