My Thoughts On #IHaveTheRightTo By Chessy Prout 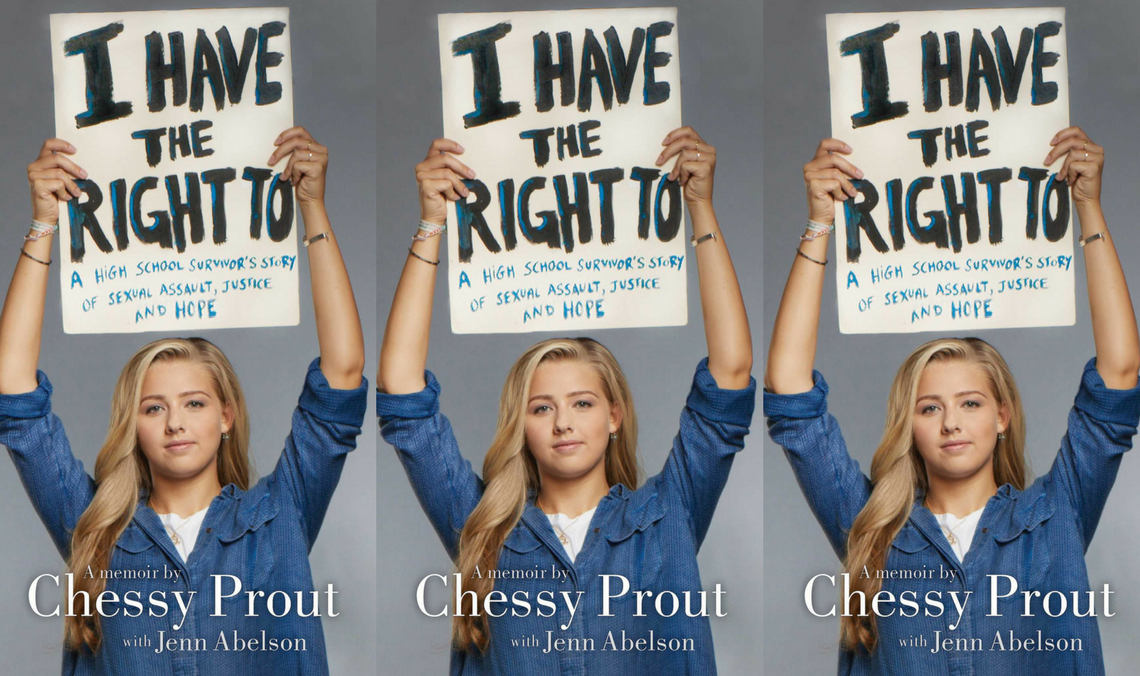 I stood in front of a shelf full of various books, each offering a passport to transport me to a new world; but there was one in particular that stood out. The girl on the cover seemed courageous and powerful. Her immortalised eyes bored into mine. Read this book. This story will teach you valuable lessons that are guaranteed you will need later in life. I listened to the book (or the voice in my head) and reached up onto the shelf. I inspected the cover in better detail.

I Have The Right To: A High School Survivor’s Story of Sexual Assault, Justice and Hope. A Memoir by Chessy Prout with Jenn Abelson

It was my last day in Los Angeles and I was at The Grove, spending the Sunday indulging in some retail therapy. I noticed that there was a Barnes and Noble and my inner bookworm was magnetized to the treasure trove of what was inside. A trip to any book store was one thing, but one abroad with a whole new wave of authors and reads to choose from would sure be an exciting adventure. The third floor had various reads which called to my attention, but it was Chessy’s story which had reeled me in and insisted on being purchased. I obliged. 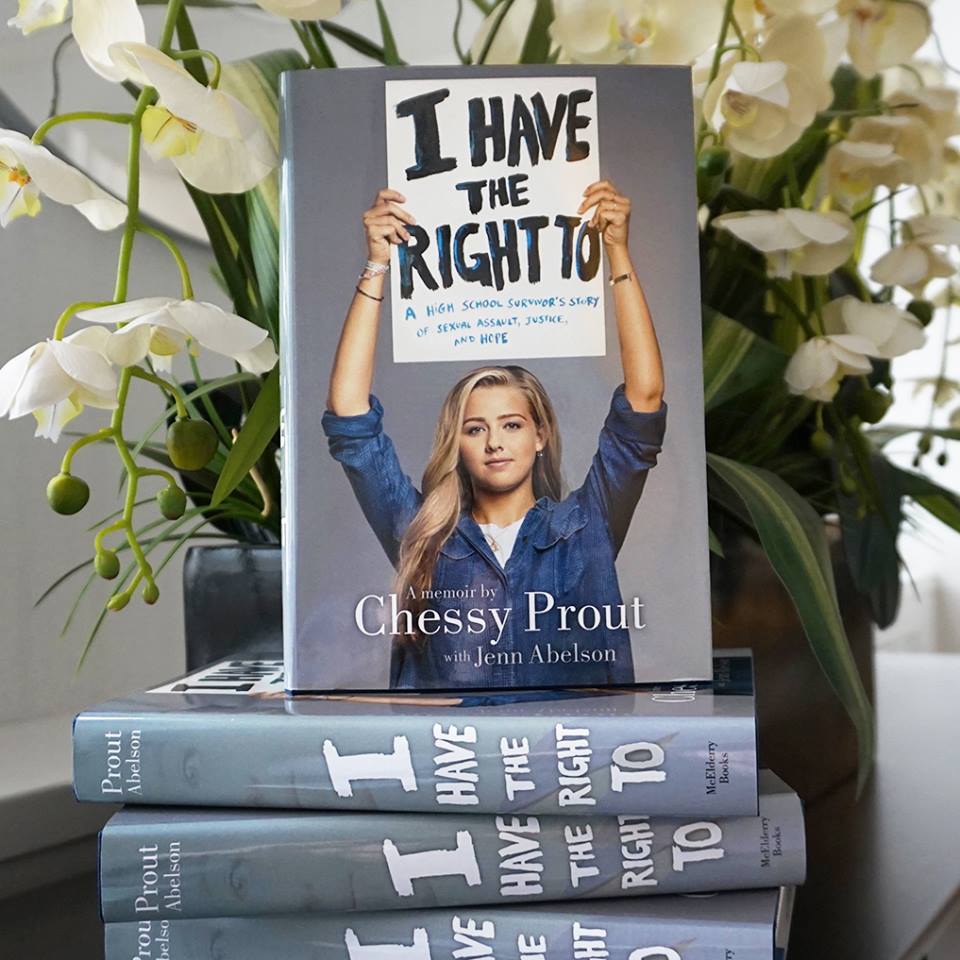 Chessy Prout is is a high school sexual assault survivor who has bravely removed her mask of anonymity for the purpose of speaking out for women’s rights. The now 19-year-old penned her story with the help of Boston Globe’s investigative reporter, Jenn Abelson, in hopes to shine a light on the brutal reality of rape culture and help other survivors find their voice. Her harrowing true story doesn’t shy away from the details of what someone goes through with sexual assault – from the attack itself right up to the aftermath and healing process.

Her story follows her experience at private boarding school St Paul’s in Concord, New Hampshire, where a graduating student sexually assaulted her as part of the Senior Salute; a sex ritual where graduating seniors pry on younger students in hopes to “score” sexual acts. With the utmost of courage and support from her parents and school counselor, Chessy reported her assault to the police. For many survivors, this is a rarity. For every 1,000 rapes, 310 are reported to the police. 57 of those reports lead to an arrest. 11 cases will get referred to prosecutors. 7 of them will lead to a felony conviction and just 6 will be incarcerated.*

But why are these figures so low? Why do so many walk away free? Chessy’s harsh reality exploits the fact of how people are more likely to blame the victim. We get a closer look as to why victim blaming marginalises the survivor, making them even doubt themselves and questioning if they really were the one in the wrong. Prout highlights how toxic it is for the media to refer to the positive aspects of the assaulter; Owen Labrie was commended for being an athlete, a “golden boy” and how he was accepted into the prestigious Harvard University – a way to pull at your heartstrings and to almost feel sorry for him, how his own crime has now ruined his life yet the blame falls on his merciful target.

But amid all of the heartbreak, the torment and the reality of living through this nightmare, Chessy shines a light on hope. Hope for her own case and for every other survivor out there. Thanks to their continuous support and strength to conquer the demons, the Prout family came up with a movement in hopes to give a voice to other survivors. #IHaveTheRightTo, the title of the memoir, was an idea seeded from her then 9-year-old sister, who questioned “when was it time for a women’s bill of rights?” Chessy, her elder sister, Lucy, and their mother worked together on creating something beautiful. Following the success of the social media campaign, #IHaveTheRightTo, it has since evolved into a new organisation with the help of fellow survivors stepping forward with their experience, intelligence, resources, and passion, which promises “to be the safe place where survivors and families of survivors can come to find support, belief in their accounts of what has occurred in their lives, advocacy for their rights, and a loving community that is growing every minute around the world.”

Reading Chessy’s story was a challenge and a journey. Experiencing the events from her point of view was shocking, eye-opening and emotional. Not only did it project her own emotions, but it made me have a better understanding of how I would have handled the situation. Having my own story to tell of physical and sexual assault (though the latter not being as big and serious of a case as the illustrated in this book) as well as a very similar mental health story to Prout’s, I felt as though I had a clearer understanding of how people in her position may feel. My heart broke as Chessy’s dream to attend St Paul’s School turned into a nightmare. I was dumbfounded by her “friends” turning their backs on her post attack. I was furious when the school tried silence Chessy and support a criminal, an attacker, a rapist. But I was also empowered. I was empowered by Chessy taking her own personal experience and choosing to share it with the world, by her refusing to give up, by taking on a 162 year old institution with a rape culture embedded in its heritage. By Chessy wanting justice not only for herself but for anyone who has ever walked a path similar to hers. It’s up to us, our generation, to make a difference. Chessy’s story led to survivors who have stayed silent up into their 60s to come forward and speak out. We are the ones who need to make this world a better and safe place for not only ourselves but our future generations. 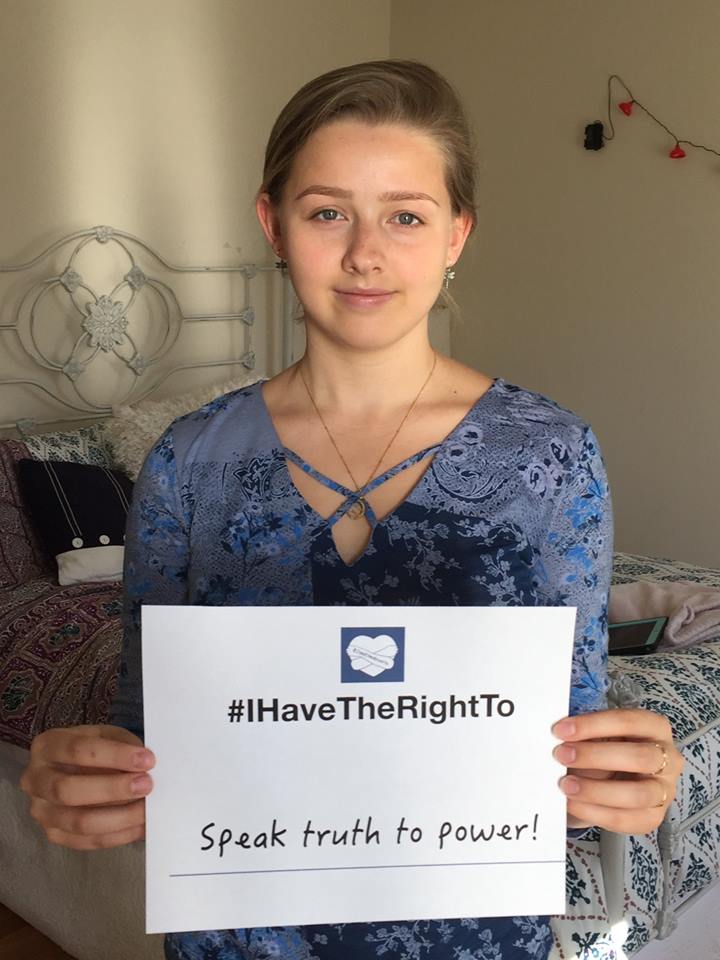 It’s shocking to think about the fact that St Paul’s did not want to support not only Chessy but its many survivors because it would taint their prestigious reputation. But St Paul’s isn’t the only school. It hurts my heart to admit that I’ve witnessed many schools here in the UK not willing to stand by those who have been hurt on their territory, by their own students and faculty. We should be teaching consent from as early as a child’s ability to first communicate and we should be having more thorough conversations with teens as they’re older, because learning at college age is just too late. Yet in the secondary school I attended, the PSHE (Personal Social Health Education)  teacher was too embarrassed to teach us about sex. What?! Because he was embarrassed, our education suffered. We did not learn about consent. We did not learn nearly as much about sex education as we should have (because one or two lessons from the school nurse about condoms and STIs is not enough). Why should it be shameful? Sure, kids are immature and laugh about intimacy, but it falls on the school and it falls on the qualified teacher to inform us of such important and valuable information. And I know for a fact that other schools in my area haven’t even touched upon the subject. Instead, we learn from pop culture.

We learn from movies and novels where consent is not brought up. Where it’s considered “romantic” if a guy kisses you even when you said no. And don’t get me started on the “boys will be boys” excuse. A guy pinging your bra strap or pulling your hair is not and should not be considered okay because he “likes you”. If boys will be boys, then girls will be girls. We need to make that a statement. We need to take that and turn it into the meaning of “if you’re going to assault me, then I will take action. I will report you. I will tell people about your crass behaviour.”

This book is more than a memoir. It’s a breath of fresh air. It is a message of hope. It is an encouragement to survivors everywhere. It is a reality check for those sheltered from the hard hitting truth about rape culture and the horrendous journey taken by people everywhere. Every 98 seconds, someone is sexually assaulted. Every 8 minutes, that victim is merely a child. Yet only 6 of every 1,000 perpetrators will end up in prison. It’s time to take action. It’s time to reclaim our bodies as our own. It’s time to fight for our rights. Because #IHaveTheRightTo not having to fear a walk home alone late at night. #IHaveTheRightTo see my sisters, my family, my friends, claim victory when they report their personal crime. #IHaveTheRightTo have myself and my body respected under my rules and #IHaveTheRightTo choose when I want to conduct in sexual activity.

Thank you, Chessy. For taking the courage within you and running with it for the sake of survivors everywhere.

I Have The Right To: A High School Survivor’s Story of Sexual Assault, Justice and Hope is available on Amazon

globally. Visit #IHaveTheRightTo’s website for resources, services and more information on sexual assault for survivors, parents and educators and to find the right support for you. 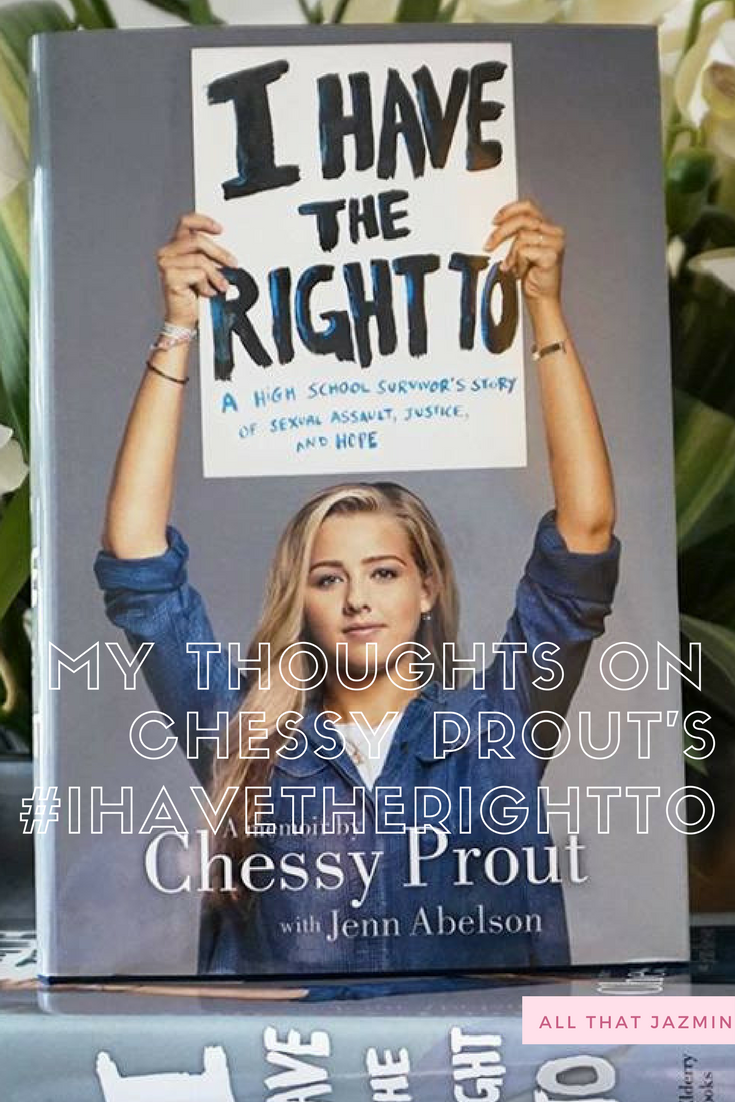