It’s that time again where I share with you the things I have loved throughout the month. It’s now December, which is shockingly worrying because this year has literally just vanished within a blink of an eye, so I’m going to share with you what I loved in October. Let’s rock’n’roll..

FOUR: The Ultimate Edition – One Direction 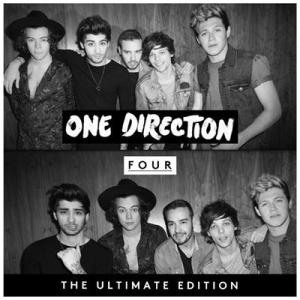 My favourite boyband released their fourth album this month, aptly named FOUR. I think this is my favourite album and not just because it’s new, but it’s full of 80’s vibes and is such a transformation from their first album, Up All Night. You can really see how the boys have grown as artists and how being given the opportunity to write their own songs has impacted their sound.

Christmas is rapidly approaching and I never know what’s the best thing to buy people. I hate giving boring gifts as it’s just so expected and forgotten shortly afterwards, so I love to give unusual and unique presents. I’ve been using Prezzybox a lot and it’s full of unusual yet quirky gifts which suits many personalities. If you’re stuck for people to buy for, I’d definitely recommend this website.

Another album I have been in love with this month is by my favourite singer, Olly Murs’ Never Been Better. Although it released late in the month, Murs has dropped songs throughout the month pre-release date for people who pre-ordered the deluxe version of the album. It’s his first album in two years and after his eight month break and it’s full of such great songs, including a collab song with Demi Lovato which I find myself playing a lot. I’m seeing Olly in concert in Cardiff in April, so I’m very much looking forward to seeing him perform these songs live as I think they are going to sound amazing.

I kept seeing the words “Argan Oil” a lot online and I started to get curious as to what it was. My friend said it was “great for thick and frizzy/curly hair” and that’s exactly how you would describe my hair. So, I gave it a go. My mother had some from B&M so I gave it a try and it was pretty amazing. My hair felt so soft and when it came to brushing it, the knots were so easy to get rid of. I know Argan Oil comes in many different brands but the one I used was sold in B&M, though I’m sure you’ll get the same effect with most brands you use.

Back to the 1D lads now and they have recently released the music video for their latest single, Night Changes. I was quite surprised by them releasing another single already as it wasn’t too long ago since they released Steal My Girl. However, I’m certainly not complaining, especially after watching the music video. This is probably my favourite one as instead of using models as the main girls, the video, directed by Ben Winston, captures how it would be to go on a date with each of the boys. It’s a very cute and funny video which proved to go down extremely well in the Directioner fanbase.

That’s it for this month. I’m sure I’ll have a lot to say about December, so make sure you check back in January for what I loved this month. What did you love in November?