Skip to Content
Home All That Jazmin Blogmas Day 9: My Fear of Father Christmas 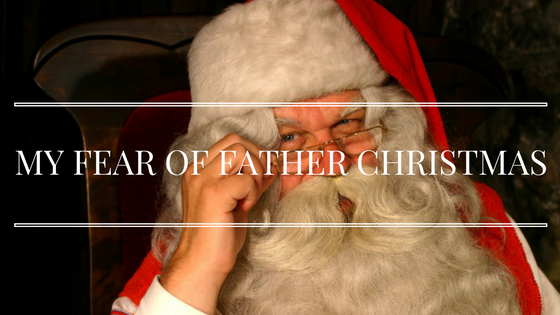 Father Christmas. Santa Clause. St Nick. The man of the moment. The Symbol of Christmas. Everyone loves a jolly old pudgy man who brings lots of presents for kids all over the world right?

Father Christmas. A big, scary old strange man who breaks into your house without consent, coming too close to you for your liking with a roaring laugh enough to hurt your tiny little eardrums.

The first? A description that seems to fit the typical seasonal icon that we hear so much about. The latter? My views on the terribly terrifying elderly bloke who scared me half to death.

I know what you’re thinking- “Jazz, he’s nice. He gives you presents.” Yeah, well he also knows when you’ve been sleeping and knows when you’re awake. To me? That sounds super stalkerish.

Okay, okay, I’m not afraid of the fictional character anymore, but when I was little and during the period where I believed he was indeed a real person, I was petrified. I don’t remember exactly what caused me to be so afraid (though, bare in mind, I have been diagnosed with anxiety. Could Santa be the root of the cause? Probably not, but clearly I was a nervous child since birth) but my Gran recalls that when I was just the tender age of two, a Father Christmas tried to take me off my mother outside a supermarket and I was not having any of it. The following years saw me absolutely trembling with fear over him. I remember at a very young age being in a B&Q and there he was; my version of Satan. A big bloke head to toe in red and a dodgy beard to cover his true identity. All he wanted to do was give me a lollipop, but I let loose from my mother’s grip and ran down each aisle. Every aisle I reached the end of, his face would peer followed by a high pitched scream from myself before running away again. My mother had to tell him to just give up because I did not and would not like him, regardless of how many free lollipops he had to bribe me with. 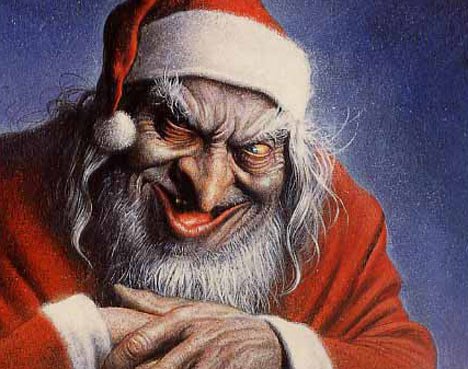 Another story was when for Goodness knows what reason, my mother dragged me to Caerphilly Garden Centre to meet St Nick. Maybe she wanted me to face my fears to get over it, but the opposite happened. Perhaps it didn’t help that there were plastic trees who had animated faces and could talk. What. A. Nightmare. This wasn’t a Disney’s inanimate object coming to life. This was work of the devil and I did not approve. We left that Garden Centre that day with a photo of a little girl wearing a Dalmatian coat, red faced and tears streaming, an uneasy looking Father Chrimbo and a mother in a Christmas jumper trying to calm her terrified toddler. That photo is still here somewhere, but I’ve no idea of the exact location. Either way, I wouldn’t want to embarrass myself by posting it.

But, though I was scared of him, it did make for good memories. When my Grandpa Griff was alive, my parents came up with a story that he would drive up halfway to my street, meet Old St Nick and collect my presents before bringing them into my house himself. When he passed away, that duty was then presented to my Grandma. Though, I didn’t really think of the logic that she couldn’t drive.

My parents split when I was a baby, so my dad would sleep at my house every Christmas Eve and he’d help calm me down. I remember how much effort he put into it. Once, I climbed into the chair bed that was set out on my bedroom floor and laid with him. He was half asleep, but not quite fully because he knew I was wide awake with fear gnawing inside of me.

“No, bloody hell. He’s got lots of countries to go to.”

“Where do you think he is about now?”

He and I talked about the “Science of Santa” and all sorts of nonsense which seemed logical to a child, before we both eventually nodded off.

Of course, as time went on, I learnt the truth behind the mysterious man and was no longer afraid. There was no need for my primary school to have to take me out of class whenever the jolly man was due to give us a visit. It was all over.

So, that’s my experience with Father Christmas. Not fun at the time, but it’s a tradition every year for the family to bring it up and poke fun at me for it. Great.

What were your experiences with Santa Clause? Comment below, I’d love to hear them!