For the first time since the pandemic began, we finally went on a trip away! With our family being made up mostly of vulnerable people, it was important we waited until it was safe enough for us to be able to go on holiday again, so our trip to Devon back in May was a truly exciting moment for us. With the loss of Louis, we’ve made it a priority to help Rosie through her grief and we thought a trip away would be a great distraction. We went to North Devon a few years ago with Louis and Pepsi, so we thought it would be great to take Rosie as we were familiar with the area and the fact that there’d be plenty of places she’d be welcome. Find out what we got up to with my North Devon Travel Diary.

We left home around midday and travelled by car which was meant to take three hours, but with a major crash on the M5, we found ourselves stuck in bumper-to-bumper traffic for a while. Rosie was confused and a bit annoyed how traffic on the other side was able to continue their journey but we weren’t! We arrived around early evening at our accommodation in Watermouth Lodges at Park Life Resorts, unpacked our belongings, and settled in for the week ahead. We took Rosie for a walk up the woodland next to our lodge before unwinding for the night after travel. 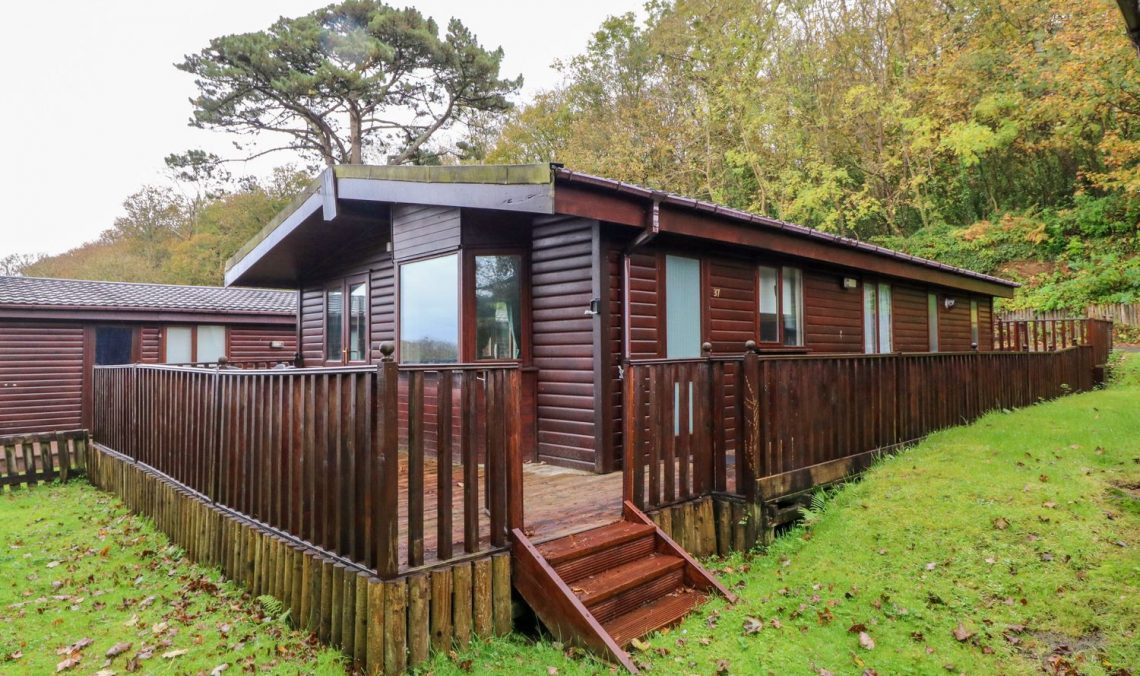 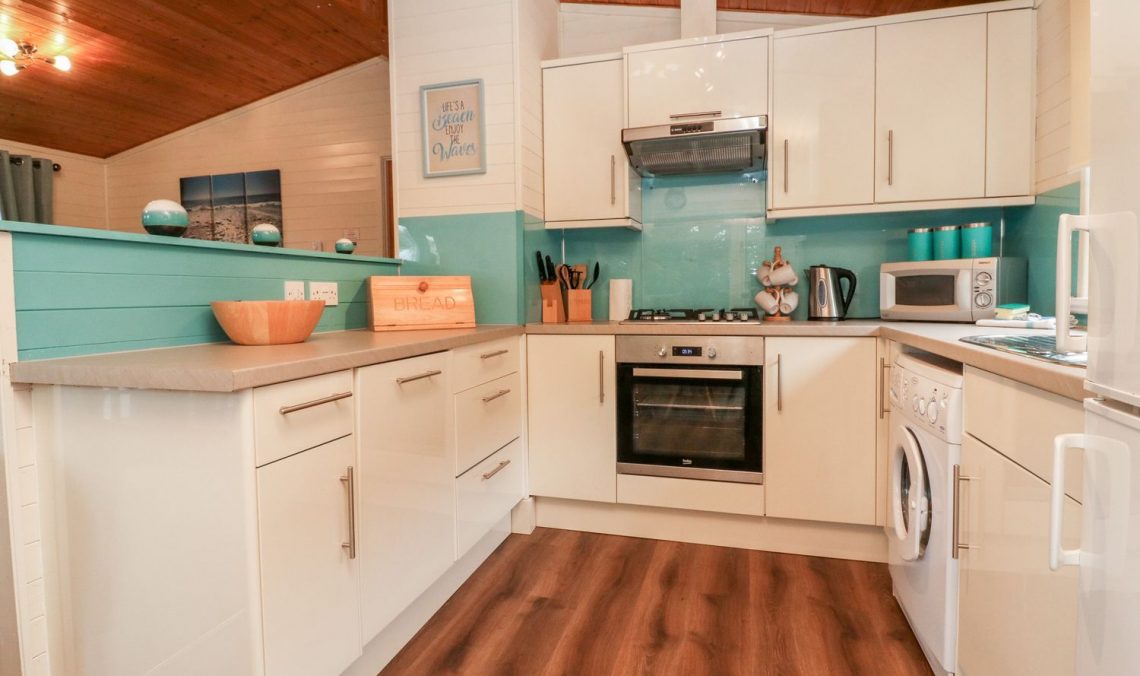 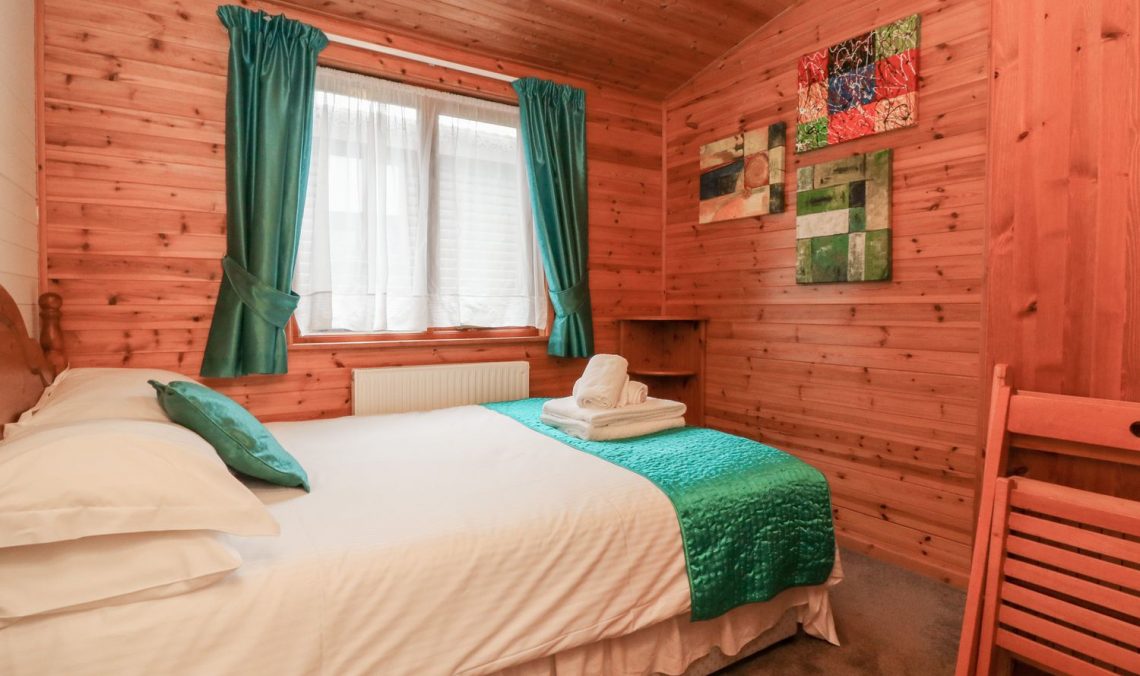 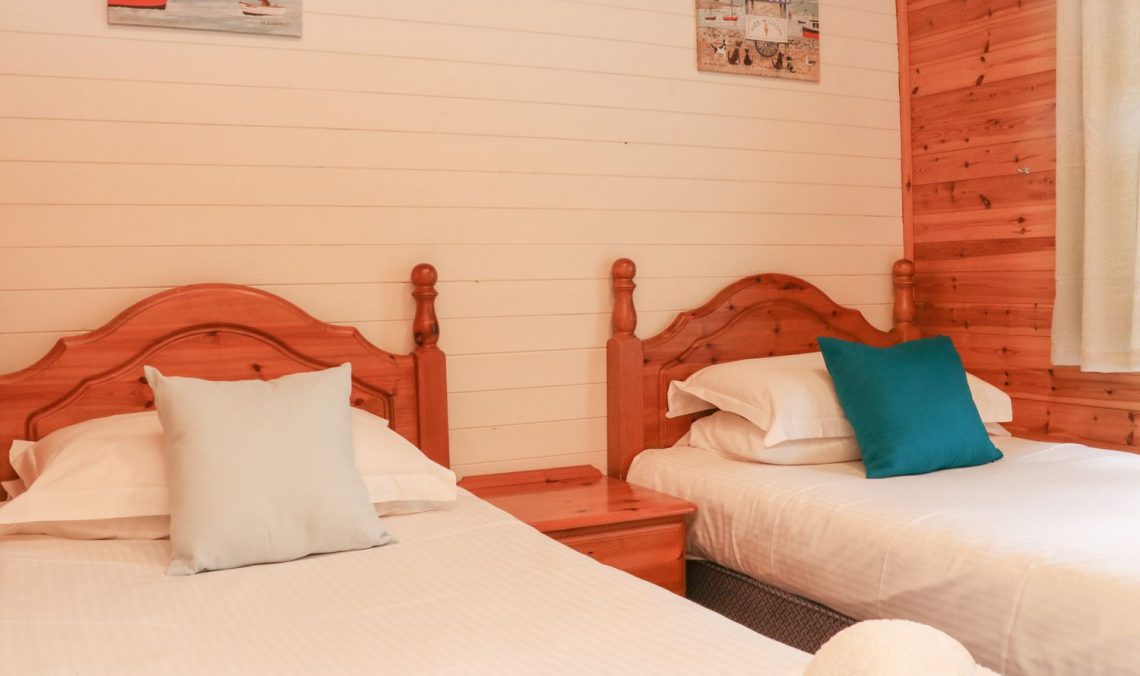 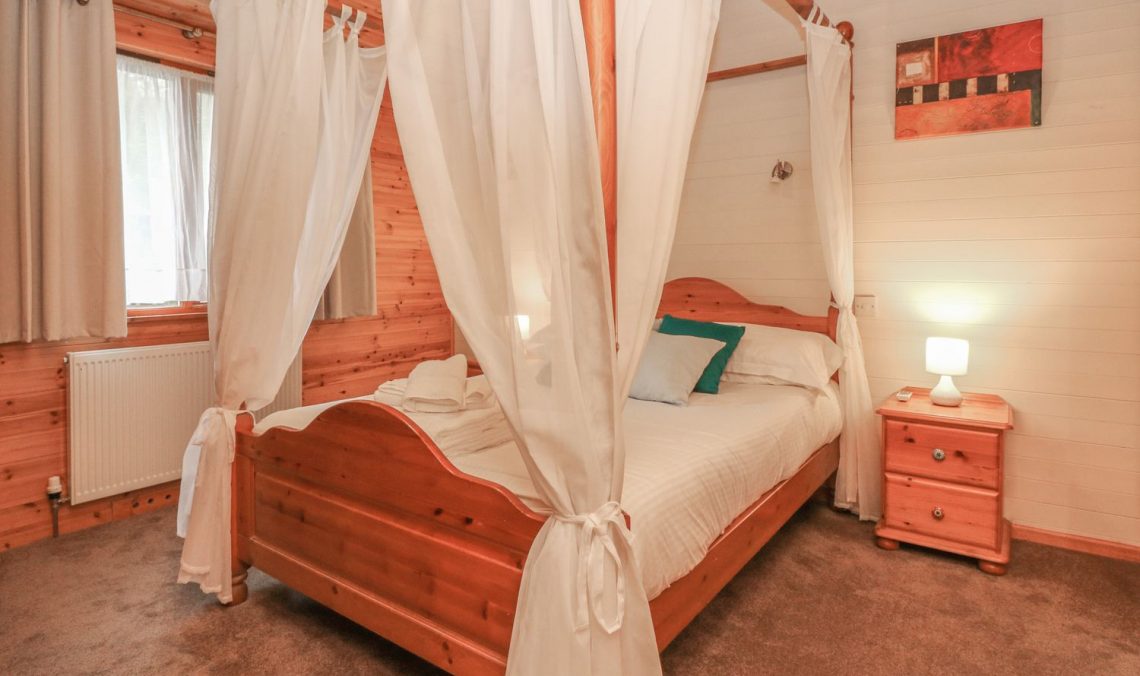 Watermouth Lodges is located in Ilfracombe and is a great place to stay with all the family. The location is just a stone’s throw away from Ilfracombe Harbour and has the best of both worlds with a sea view while being nestled into the outskirts of the woods. There were a lot of on-site facilities which unfortunately we didn’t get round to using this time around, but it was great to know there was a bar, restaurant, and other on-site activities such as a pool and mini-golf. Our lodge was owned by Sykes Cottages and had a master bedroom with a double bed and ensuite, a room with a double bed, and a twin bedroom, with those bedrooms sharing a bathroom. 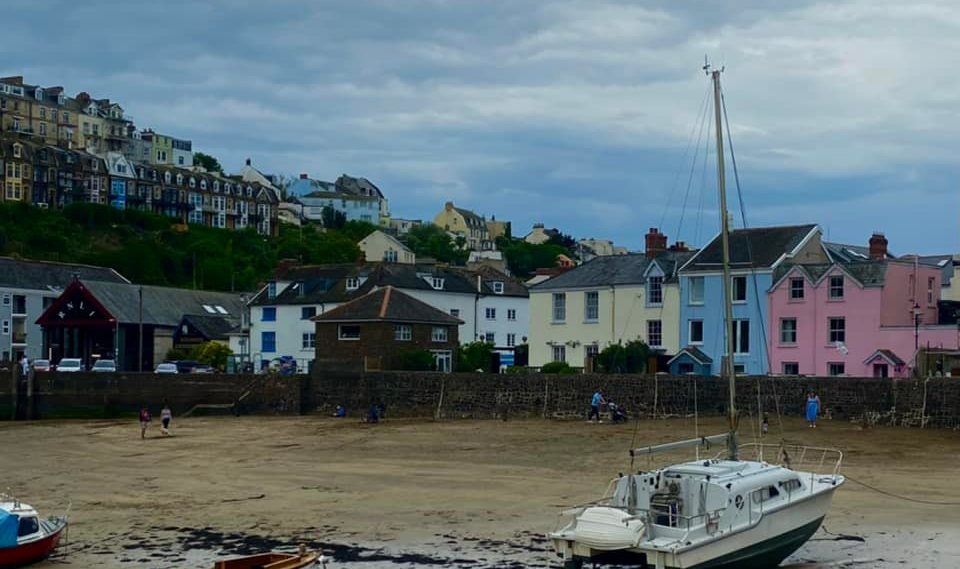 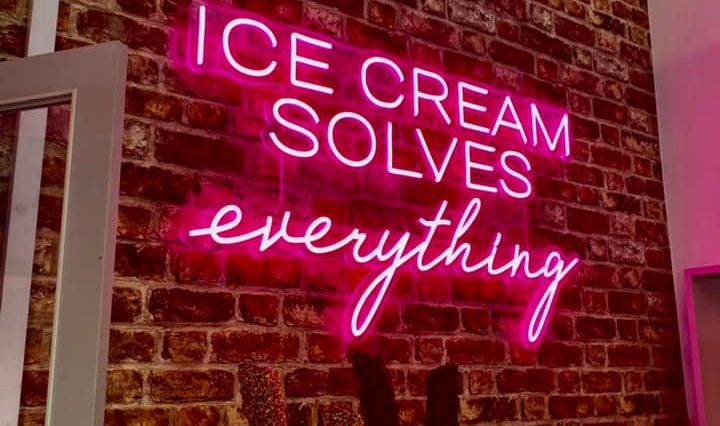 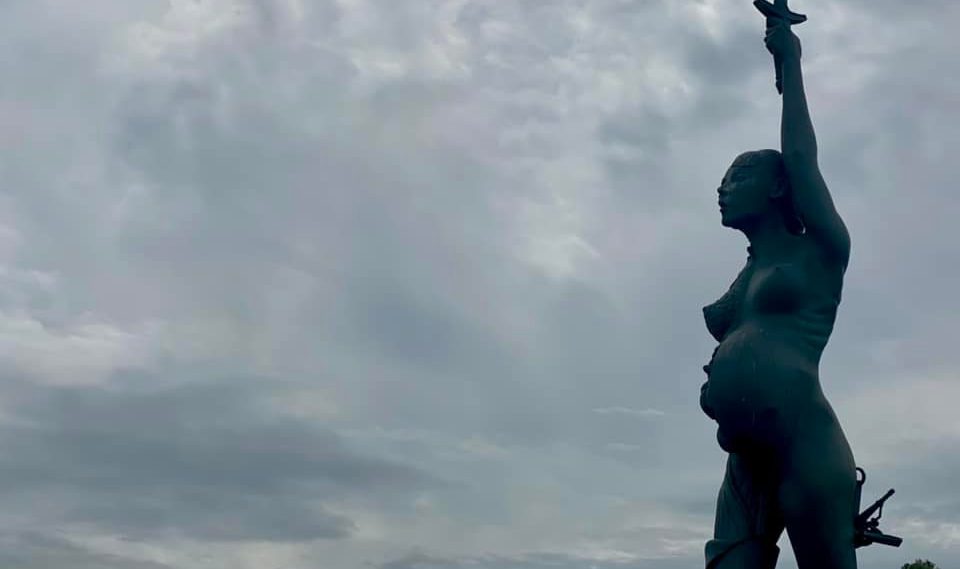 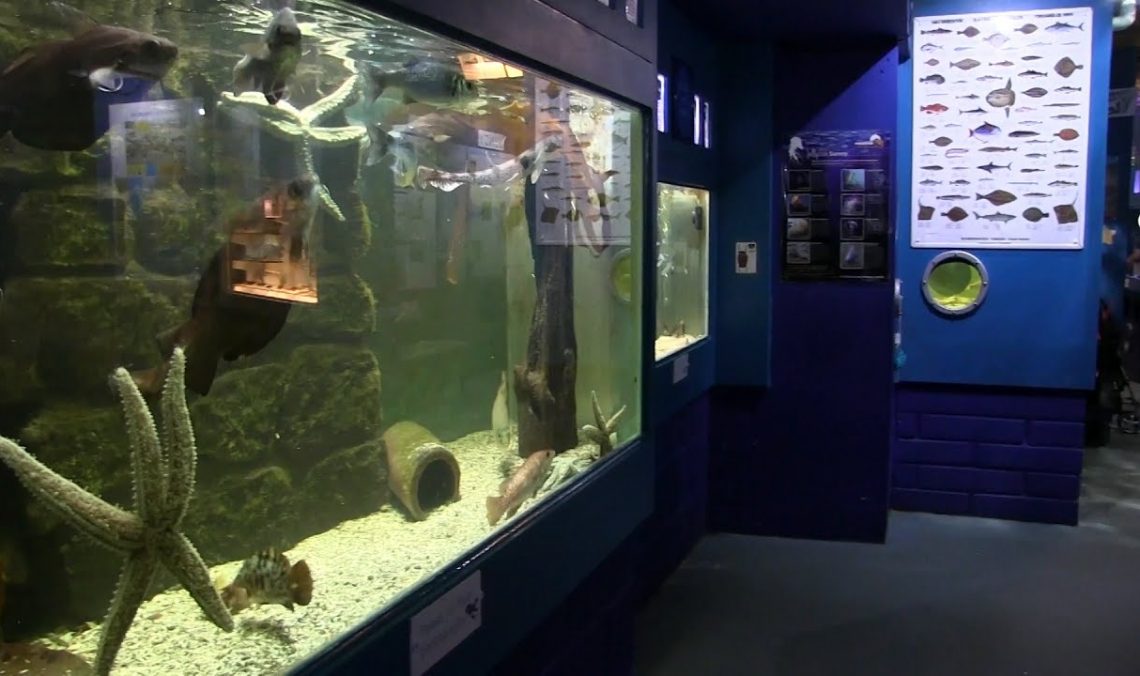 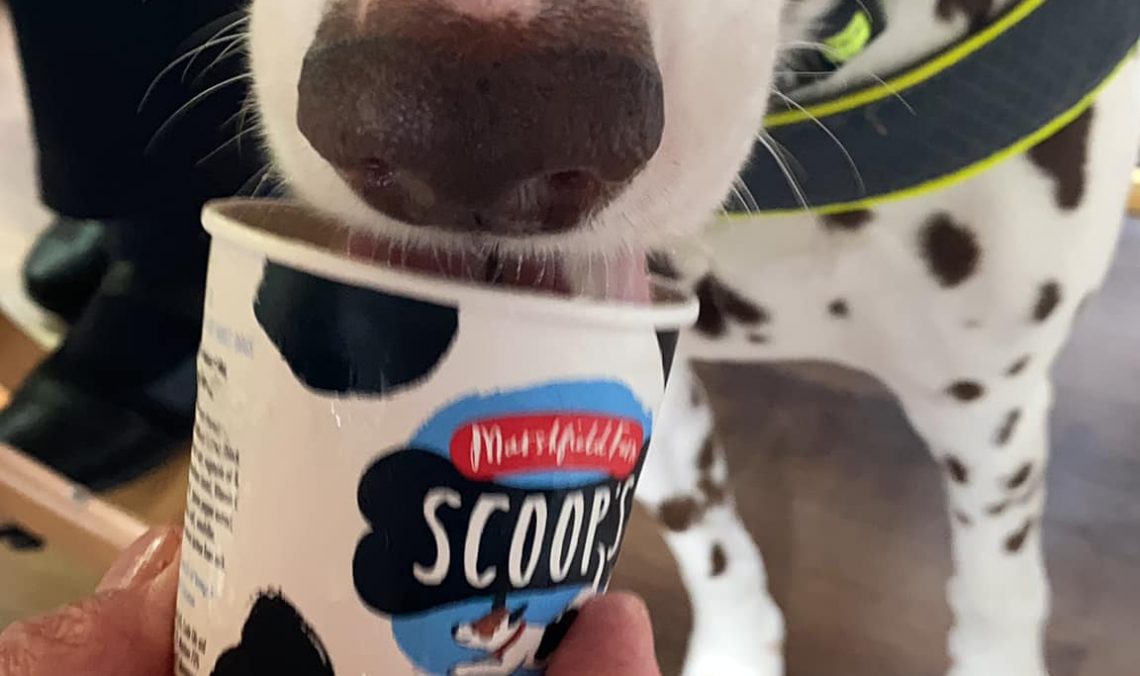 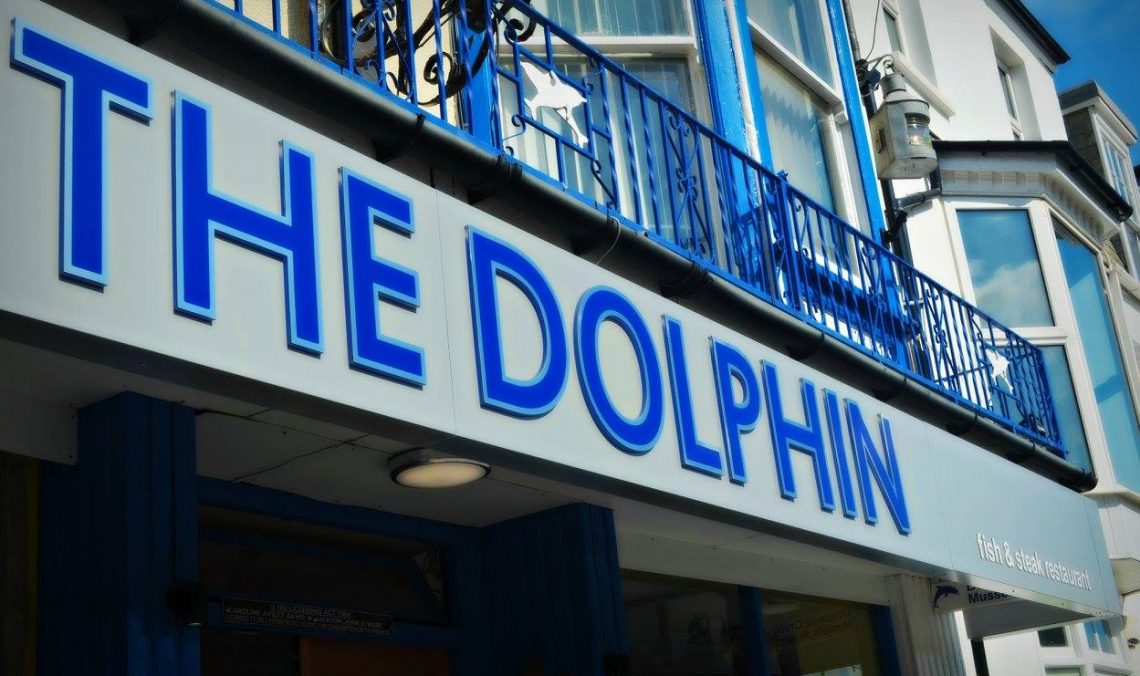 Today we chose to visit Ilfracombe. We really enjoyed it last time and were excited to go back again. Ilfracombe is a lovely little fishing town that’s pretty historic and a very picturesque area. The harbour feels like a typical British holiday and the little shops are such a delight to visit.

Overlooking the harbour is Verity, a 20.25-meter tall sculpture created by Damien Hurst out of stainless steel and bronze, which is a real eye-catcher in the area. Verity is a sculpture of a pregnant woman standing on a pile of law books as she holds a sword with one arm, and the Scales of Justice with the other. On one side her muscles as well as her fetus in the womb exposed. Hirst describes her as a “modern allegory of truth and justice.”  It was pretty impressive to see her and learn a bit about her.

The last time when we were in Ilfracombe, we had really nice chips from The Dolphin and decided to make it our stop for food again this time. If you want good quality fish and chips, especially as a tourist wanting the famous delicacy, I would say this is definitely one of the best in the UK (Brighton Pier coming in as a tie with The Dolphin.) My mother and I are vegetarian and just stuck to chips but my gran and stepdad can definitely vouch for the fish tasting delicious.

We initially wanted to take a boat trip but we had missed all the times for that day that allowed dogs on the boat, so my gran and I chose to go to the Ilfracombe aquarium while my parents took Rosie for a walk. It’s a great little attraction ideal for all-weather and a nice thing to do with the family. It’s a short but educational experience located in the Old Lifeboat House on the harbour. The aquarium showcases an insight into the kind of aquatic creatures you can find locally around North Devon and is home to over 75 species of fish. If you have kids with you, there are also free quizzes available on entry to make it even more fun and educational. There are also friendly fish keeper guides who you can chat with to learn more if you’re interested.

I think Rosie’s highlight of this day was when we stopped off at Fleur & Mimi’s to get some doggy ice cream to take home with her!

We planned to go to the twin towns of Lynton and Lynmouth today but found Lynton was a very difficult place to navigate as a disabled family with a wheelchair and mobility scooter, so we ended up leaving and driving around to Lynmouth to spend the morning there. We decided to take Rosie on the historic Lynton & Lynmouth Cliff Railway for a ride. It connects the two towns together and is the UK’s only fully water-powered railway as well as the world’s highest and steepest fully powered water railway in the world. Normally people use it to transport between the two towns but with Lynton being out of the question, we decided to go on it to get a great view to take photos overlooking Lynmouth and to see Rosie’s reaction to riding it. She was pretty curious about the whole thing and wasn’t totally sure what was happening, but she seemed to enjoy having a sit-down and people fussing over her rather than paying attention to this famous attraction! 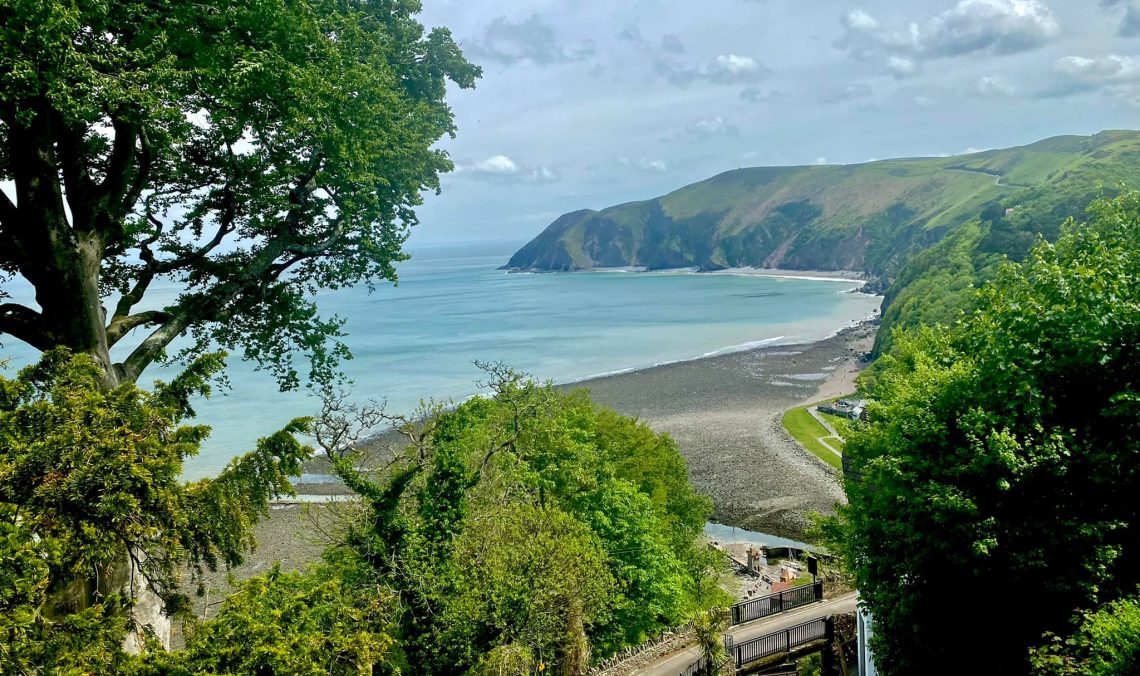 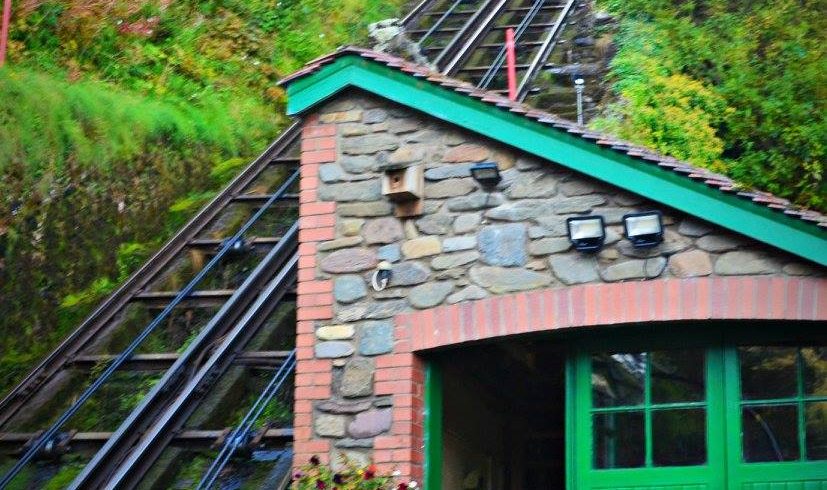 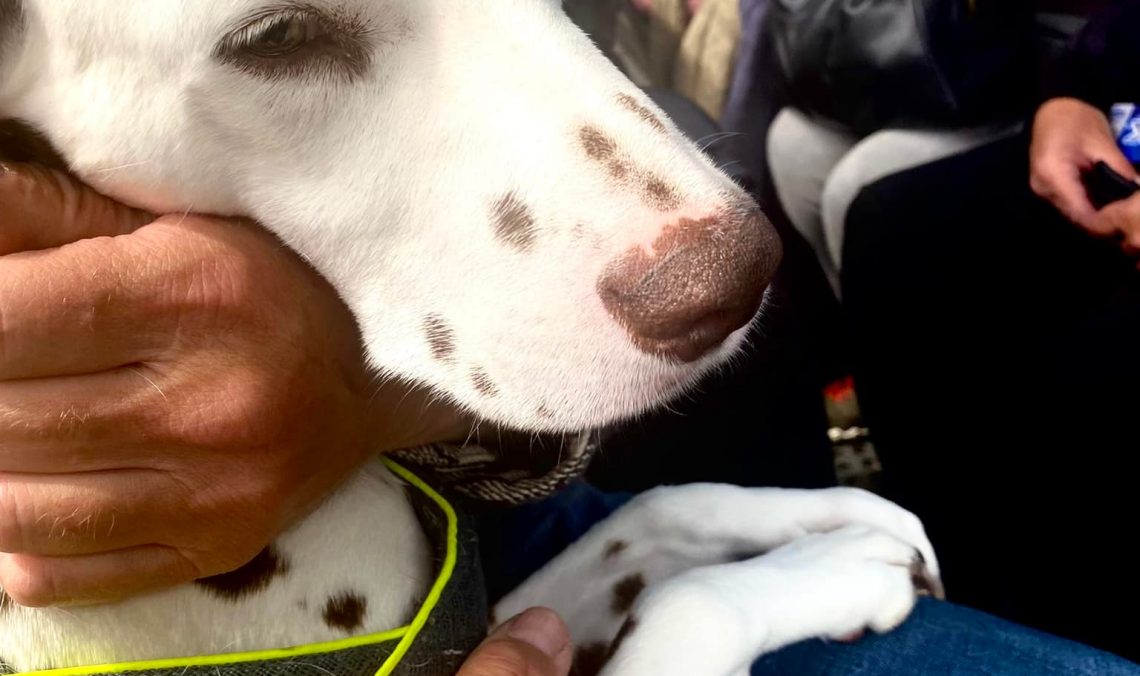 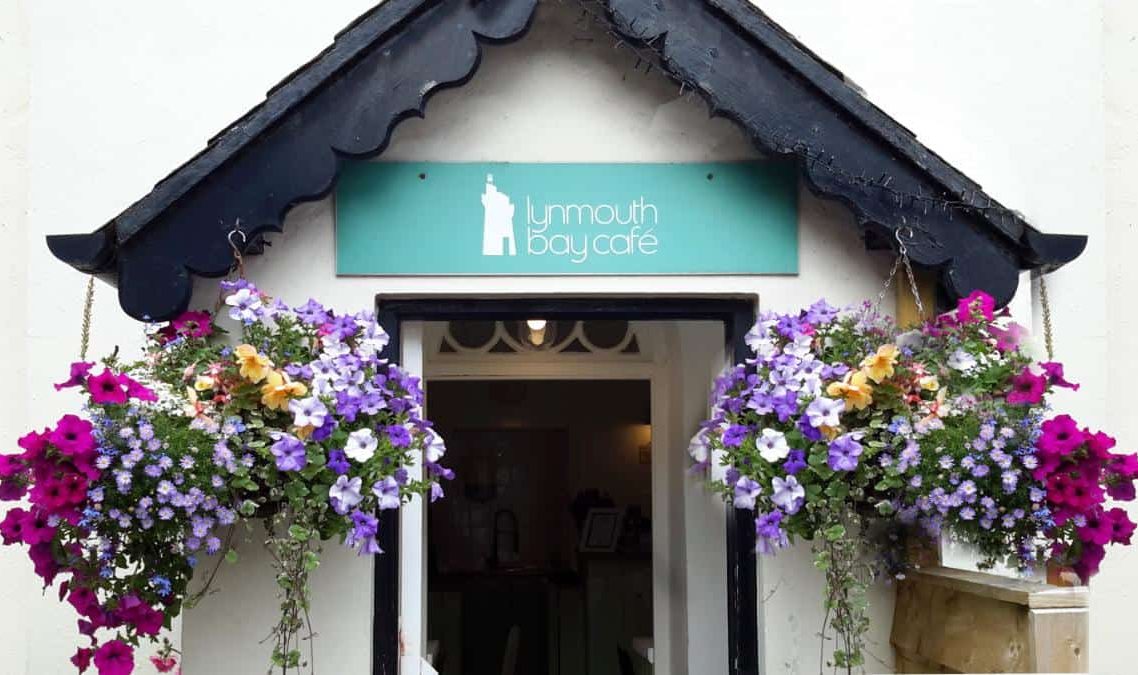 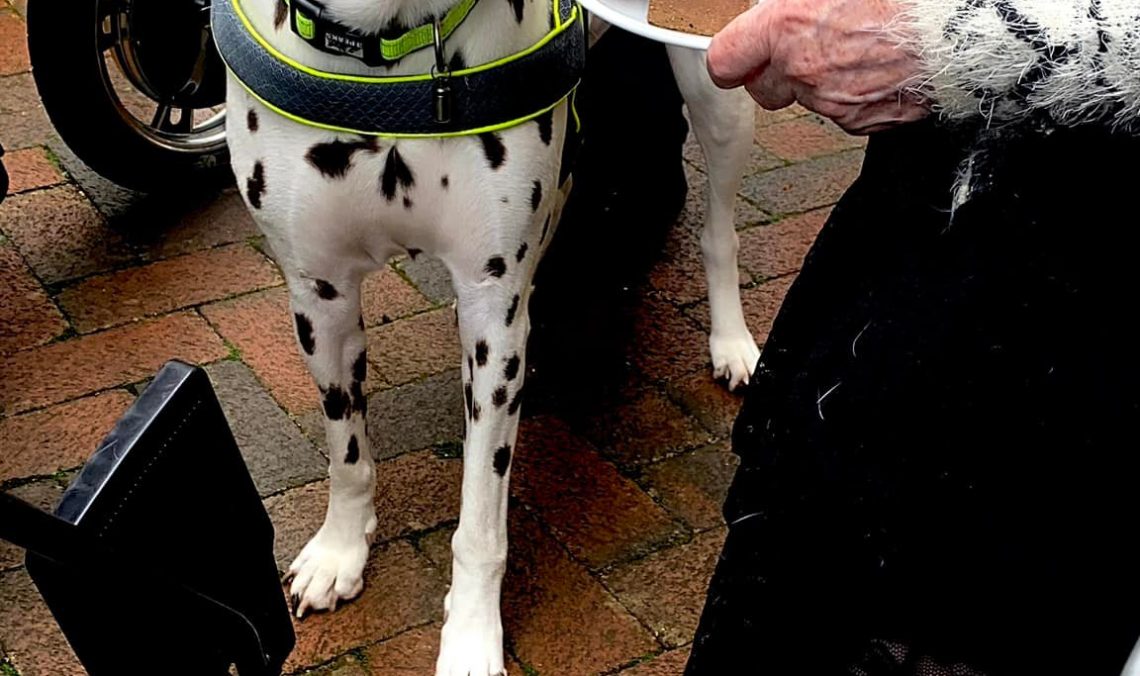 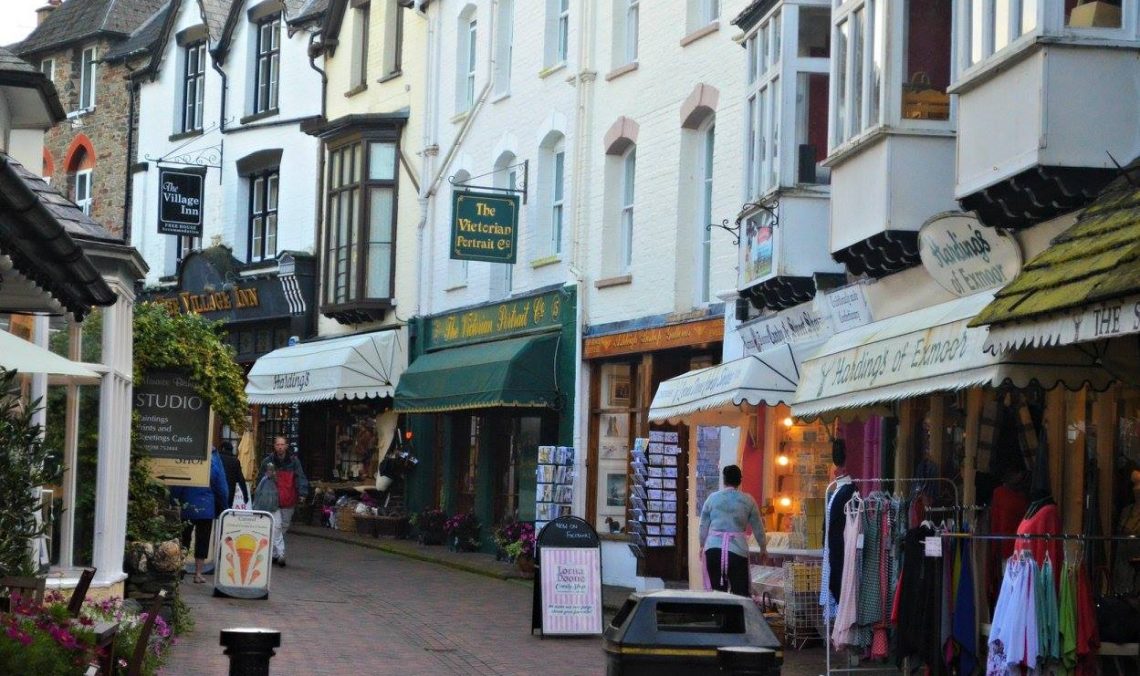 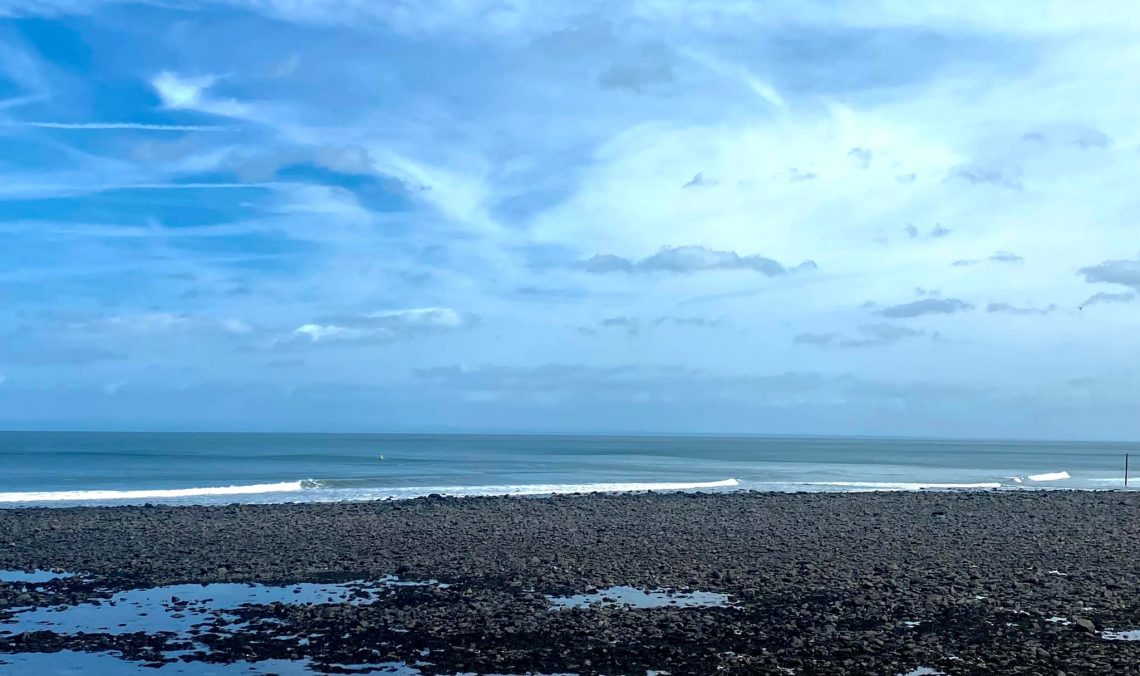 Lynmouth is full of quaint little independent shops and we had a great time exploring them and supporting small businesses. There was one store I went to which I never caught the name of on Lynmouth Street that sold some really nice clothes and accessories. They stocked lots of other small businesses such as Rocket & Rose and Glitter Punk which I really loved. We also went to Caravel Toys & Gift Shop where we picked up some lovely gifts for my nephew. There was so much there that I could have bought him a ton, it was unreal. The toys felt a lot more traditional rather than electronic or big brands and they also had a lovely selection of books and apparel, too. My gran and I spent a long time trying to decide which book would be best since they had a bunch of Winnie The Pooh ones which both my nephew and I love!

Long days always call for a tea break, so we stopped by Lynmouth Bay Cafe for my gran to have a cup of tea, and we even bought Rosie a liver cake that was for dogs for just £1! She was too interested in everything going on around her so we ended up taking it home for her, but it was great to know that the dogs are included in menus around the area.

After spending the morning in Lynmouth, we headed to Affinity Shopping Centre after seeing it advertised in our lodge. If you haven’t guessed by now, my family and I are suckers for shopping! This wasn’t dog-friendly so my stepdad took Rosie for a walk before letting her rest in the car while my mother, gran and I wandered around the shops. While Affinity doesn’t allow dogs, it’s definitely accessible. I was able to push my gran’s wheelchair around with no issues and my mother was able to drive her mobility scooter. There weren’t too many stores in the centre but my Gran and I enjoyed going to The Works and taking advantage of the deals they have, and the three of us also enjoyed looking around The Gift Company. It was more spacious and had a lot more to offer than the one in our local McArthur Glen, so that was great to look around.

We spent the evening unwinding in the lodge after a long day. One thing that’s important for our family is making sure we don’t overdo things because we’ll end up burning out or causing flare-ups. The lodge being all on one floor and everything in close proximity made things so much easier and so we settled in watching Netflix before heading to bed.

Today was our last day before travelling home and we spent the day in Barnstaple. On our last trip, it was raining a lot so we cut the day short, so we knew we had to go back and get to experience it properly this time. We went to the Barnstaple Pannier Market which had a few nice stalls including one that sold Vintage Levi Jeans which my stepdad really enjoyed. Barnstaple had a lot more high street stores and I made the impulsive decision to finally get my ears repiereced. I planned on doing it for a while but never went through with it, so I decided that I’d get them done in Superdrug since I never knew they offered it there. We mooched around the town looking in between smaller shops and high street ones before making the stop at The New Amsterdam for food. 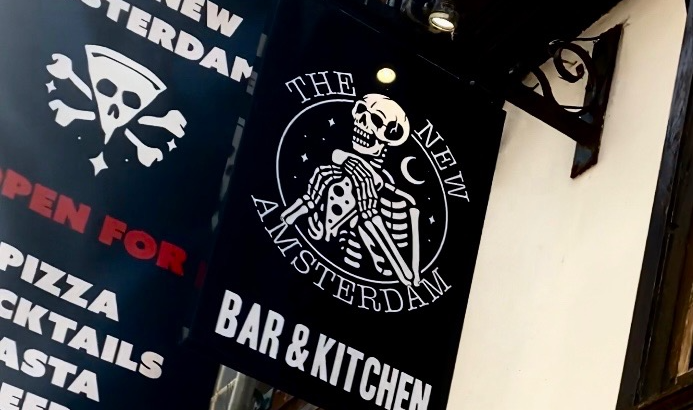 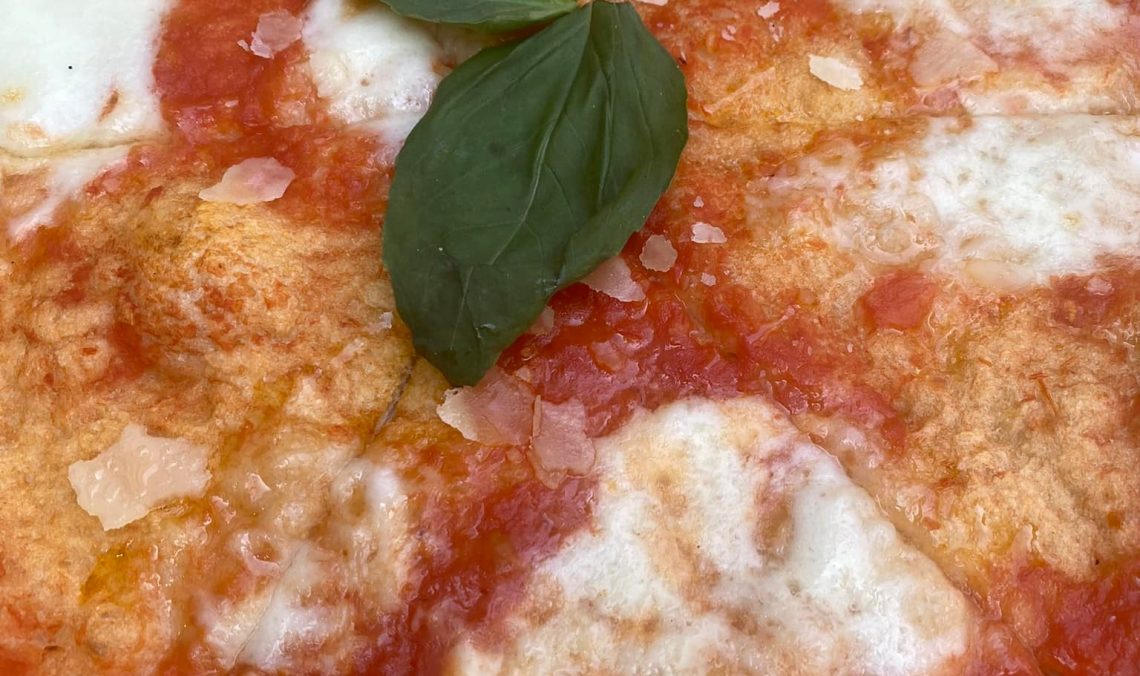 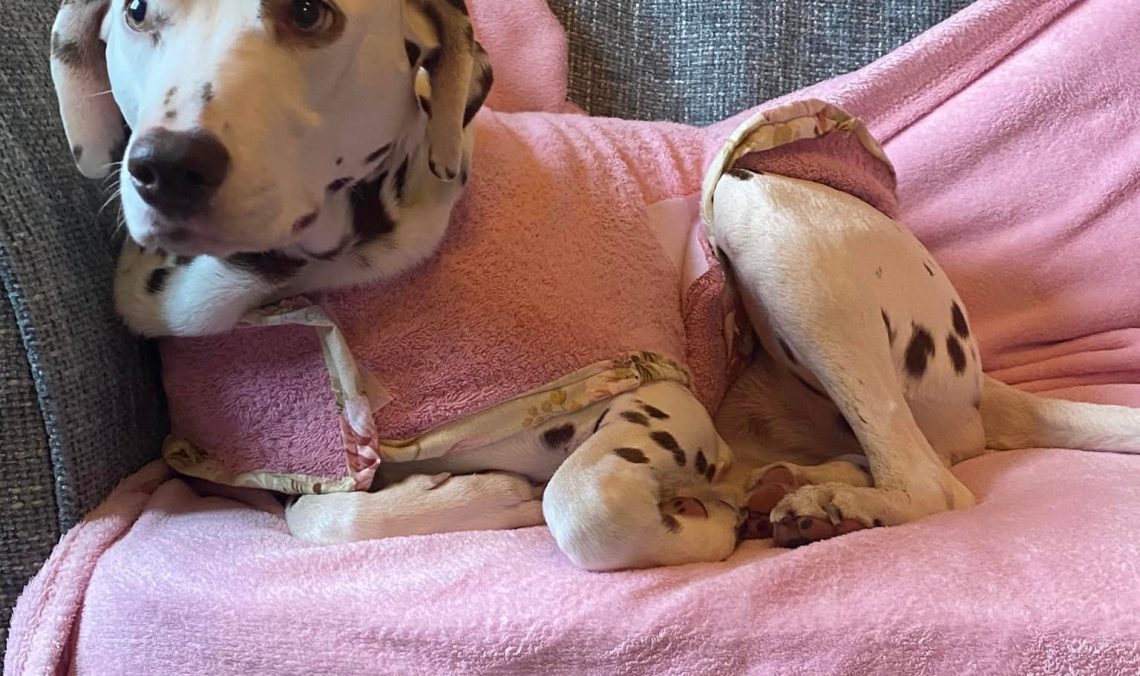 The New Amsterdam is a grungey nu-metal-themed bar and kitchen which serves hand-stretched sourdough pizzas as well as other Italian American cuisines. We opted for the £5 menu and we thought that given the price we’d be given pretty small pizzas but we were pleasantly surprised to find that the pizzas were fairly generous in size given how cheap they were compared to the main menu. The quality of these pizzas was next level. Having been to Rome which is literally the home of pizza, we were able to say that the pizzas at The New Amsterdam were literally on par with actual Italian pizzas. Now don’t get me wrong, plenty of places do delicious pizzas but I’ve never found anything quite like what I ate in Rome until visiting here. Though dogs aren’t allowed inside, the owners were happy to let her sit outside with us, which was really accommodating.

We had a great time in Devon and it was great to be able to take Rosie with us to a number of places. We’d love to go back and even stay at Watermouth Lodges again before exploring more dog-friendly places.

Check out my TikTok vlog of Ilfracombe below… and Rosie’s POV!

Have you ever been to Devon? Where are some dog-friendly places you’ve visited? 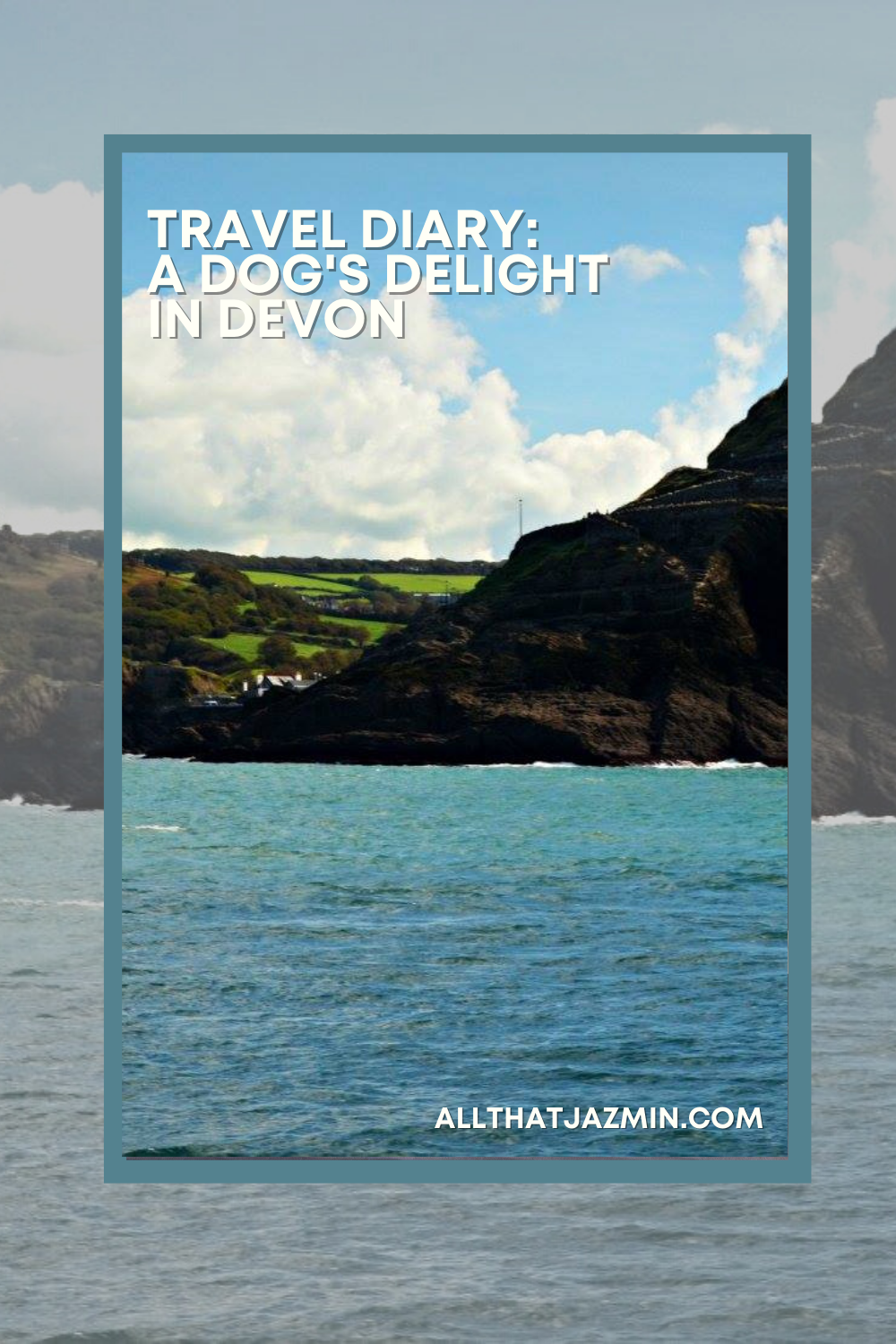